Today we make the spreaders that will brace and strengthen the legs of these tray tables. There are two types of spreader; the upper spreaders also serve as a part of the latching mechanism that will hold the table in the open position and uses a single arch on it’s lower edge as a decorative touch. The lower spreader just braces the legs and uses arches on both the upper and lower edges giving it a bow-tie appearance. 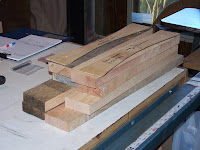 But we start with the rough parts blanks that I made up the other day. These are not thick enough to get two spreaders from each, but too thick to just plane them down. Well… I could just plane them down, but everything that ends up in the dust collection bag is wasted lumber. 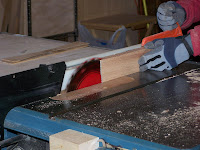 So instead I resaw a thin piece off of each blank to reduce it’s thickness, then plane them to finished size. The thin pieces I cut off have a number of uses around the shop. 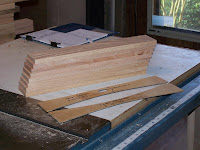 After trimming the thinner pieces to width and length they are ready for final shaping. I use the templates to lay out the over all shape, the location of the latch tab hole in the upper spreaders and the pilot holes in the ends of each spreader.

While working with these templates a thought came to me as a way to increase the efficiency and usefulness of these templates, so I clocked out and built a new one that serves the same purpose as both of these, and adds a new twist that will save time. More about that in a bit. 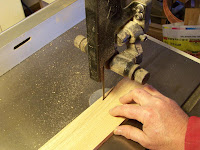 Then the spreader blanks and I went to the band saw and I cut the arched shapes into the pieces. I leave just a bit of wood outside the lines so that I can trim them down to the line and remove all saw marks and refine the arcs. I have always done this with a drum sander, but this takes a while, produces a good amount of dust and is tedious. It also does not insure that all arches are the same… they will be close, but not necessarily the same because I'm sanding freehand to a line. 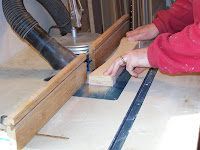 The new jig I built wraps around the spreader blank to not only accurately lay it out, but to serve as a holder and routing template that allows me to use a flush trim bit in the router table to trim the spreaders to shape very quickly and accurately. The pilot bearing on the router bit rides on the template while the cutters just below it trim the waste wood away from the part. Pretty slick if I do say so myself. 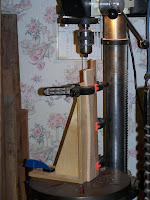 After shaping the parts I take them to the drill press and yet another jig that holds the spreaders vertically so I can bore pilot holes for the screws that will bind them to the legs. That done I switch the drill press over and set it up to bore the holes that will form the opening for the latching mechanism.

Then it’s back to the router table, now fitted with a round-over bit to round the long edges and the latch opening. And that’s it. Normally I would have started sanding the parts I’ve made so far today, but some things came up that demanded my immediate attention. Good things, but distractions from this project. So we’ll get to that tomorrow. 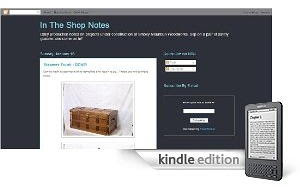